What marked the beginning of the modern era of finance capitalism, and what differentiates it from the earlier era of industrial capitalism? There is some good information and arguments on this in David Harvey’s A Brief History of Neoliberalism (2005), and in Gerard Dumenil and Dominique Levy’s Capital Resurgent: Roots of the Neoliberal Revolution (2004) (which is cited extensively by Harvey).

By most measures, finance capitalism arose out of the crisis of the 1970s, and its hegemony has lasted at least until the 2008 crash. There were several factors in why finance capital started becoming so structurally dominant:

One major qualitative change in the era of finance capitalism seems to be the commodification of consumption. This might be a strange way of putting it; after all, isn’t consumption always about consuming commodities? But what I mean here is that under finance capitalism, the very act of consuming — the purchasing goods and services — itself becomes a commodity, to be bought and sold on the market, in the form of various types of consumer debt.

Another major qualitative change was in the nature of corporate governance and the control of profits. After the 1970s, industrial production was increasingly controlled according to the dictates of finance. More and more profits were sucked up into finance companies and to shareholders, rather than reinvested back into production, as was the general trend during industrial capitalism; and on the flip side, many industrial corporations increasingly branched out into finance themselves. 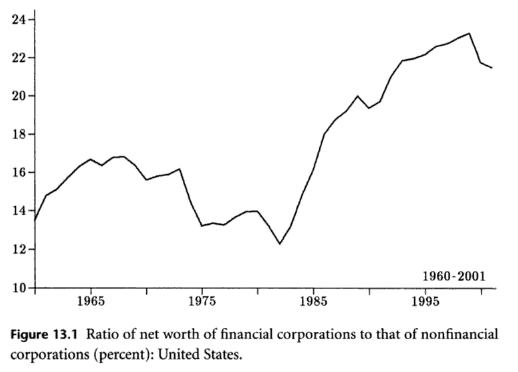 Another way we can describe this periodization is by pinpointing where the center of dynamism was in the economy during different eras. In the era of industrial capitalism, the cutting edge of profit-making was in creating new industrial goods: automobiles, household appliances, houses, gadgets and widgets and doohickeys and whatnot. In the era of finance capitalism, the cutting edge of profit-making shifted toward the creation of new types of debt and other avenues for extracting surplus value from the circulation of capital, rather than just in production and distribution.

I’m not sure quite how accurate all of this is; there are some good graphs in Capital Resurgent clearly demonstrating how finance companies become very powerful in the 1980s and 1990s, if you judge by metrics like market cap or rate of profit. However, other metrics — i.e. consumer debt in the US — don’t as strong or clear of a trend. It’d be useful to find some more raw data-sets on such things, to get a stronger quantitative understanding of the transition.

But the real purpose of thinking through this potential framework of industrial capitalism vs. finance capitalism is to consider whether there has been yet another shift, toward an era of technocapitalism, where the cutting edge of profit-making is in the commodification of data. After all, data has been declared to be the new oil, and tech companies are generally understood to be at the top of contemporary capitalism’s pyramid. This also raises the question of how useful the term “neoliberal” actually is, and whether it is specific to finance capitalism and whether we need a more nuanced understanding for technocapitalism. But more on this another day.