The slogan “we have 12 years to prevent a climate catastrophe” has been thrown around a lot since the IPCC released a special report in 2018, which focused on the importance of limiting global warming to 1.5 degrees Celsius. I don’t particularly like the slogan, for two reasons: one, because it implies a kind of hard, unchanging timeline, and two, because it creates the image of an apocalyptic brink, past which there is no return. Neither of these are a good way to think about the climate crisis.

Mitigating the crisis is not about how much time we have left, but how much carbon we have left. The 12-year time limit is derived from how much carbon we can put into the atmosphere before we cross 1.5 C of warming. Chapter 2, Section 2, Part 2 of the IPCC Special Report analyzes this budget, and finds that the general range of how much carbon dioxide we can emit is likely somewhere between 420 and 840 gigatonnes; the 50% confidence value of the limit is 560 GtCO2. For reference, the total amount of carbon dioxide humans have emitted so far is roughly 2200 GtCO2. Comparing this budget with the rate at which we’re emitting carbon dioxide tells us how long we have until we push warming past the 1.5 C — assuming, of course, that this rate stays the same. If fossil fuel use peaked and stabilized in 2017, at a rate of 42 GtCO2/year, then our carbon budget would be exhausted after 13-14 years, around 2030. 12 years after the report’s release in 2018 — thus, the time limit.

But since this depends on the rate of carbon emissions, the time limit will change as the emission rates change. Global fossil fuel use today is in fact growing, at a rate of 2-3%/year, which knocks a couple years off of how fast we’ll exhaust the carbon budget. One the other hand, if somehow global carbon emissions peaked this year and went on a 2% yearly decline, we would instead add two years to the time limit; a 5% yearly decline would add around nine years. Thus, there is reason to be both optimistic and pessimistic: if emissions keep rising, that 12-year time limit will shrink, but if we can peak emissions and start decreasing it, the timeline will start to slowly stretch out, giving time for even more emissions reductions.

And if we don’t meet this moving deadline…well, things will get bad. But we should be clear about when and how things will get bad; its not like we’ll suddenly be engulfed with hurricanes and mega-droughts destroying our cities and displacing billions the second the last molecule of the carbon budget is used up, whether that is in 2030 or 2040 or whenever. And its not like things will be fine and dandy until that moment, either; this much should be clear from the widespread negative impacts that 1 C of warming is already having on the world. Peaking at 1.5 C will prevent much catastrophe, but it would have been much better if we had peaked at 1 C. Likewise, peaking at 2 C will bring much worse impacts than peaking at 1.5 C (such as the destruction of the coral reefs), but will nonetheless be much better than peaking at 3 C, which in turn will be much better than peaking at 4 C, and so on. This logic holds even when accounting for feedback loops and tipping points that could push climate change beyond the scope of human mitigation, since peaking human carbon emissions earlier rather than later will (presumably) prevent more dire tipping points from being reached, and make it more likely that we can figure out some way to stabilize the climate before any extinction scenarios play out.

So people shouldn’t despair when looking at the more sensationalist headlines about “12 years to save the world”. Its not a make-or-break deadline even though the stakes are massive and planetary in scope. Whatever we can do in the crucial decade of the 2020s will make the future that much marginally better, and we shouldn’t let pessimism about whether we can have a total victory stop us from fighting like hell.

The Fifth Season is the name of the first book of the Broken Earth series, a critically-acclaimed science-fiction/fantasty trilogy that is set on an alternative Earth that is far more geologically active, to the point where climate catastrophes are routine, civilizations are in a constant state of imminent collapse, and the specter of a sudden and horrific increase in resource scarcity is always looming.  An era of a climate catastrophe is called a “Fifth Season”, and usually lasts years or even decades, and is usually marked by volcanic ash and smoke choking up the atmosphere and blocking out the sun.

It seems likely now that Northern California will be having its own “fifth season” of wildfires and smoke, between fall and winter.  Last year, in October, firestorms wrecked havoc across Northern California, and dumped smoke into the rest of the Bay Area for several weeks.  44 people were killed, and $14.5 billion in damage was done.  It was the first time I can remember that the Bay Area was severely affected by wildfire smoke from the northern regions.

Post-fire wreckage of what was once a suburban neighborhood in Santa Rosa, CA

Now, its happening for the second year in a row, with devastating fires in Butte County creating even more unprecedented smoke conditions in the Bay Area.  The Camp Fire is already the most destructive in Californian history, with 63 confirmed dead so far and entire towns burned to the ground.  The smoke around Sacramento and the Bay Area has oscillated between “unhealthy” (AQI > 200) and “hazardous” (AQI > 300) levels.  As of right now, the Bay Area appears to have the worst air quality in the world. 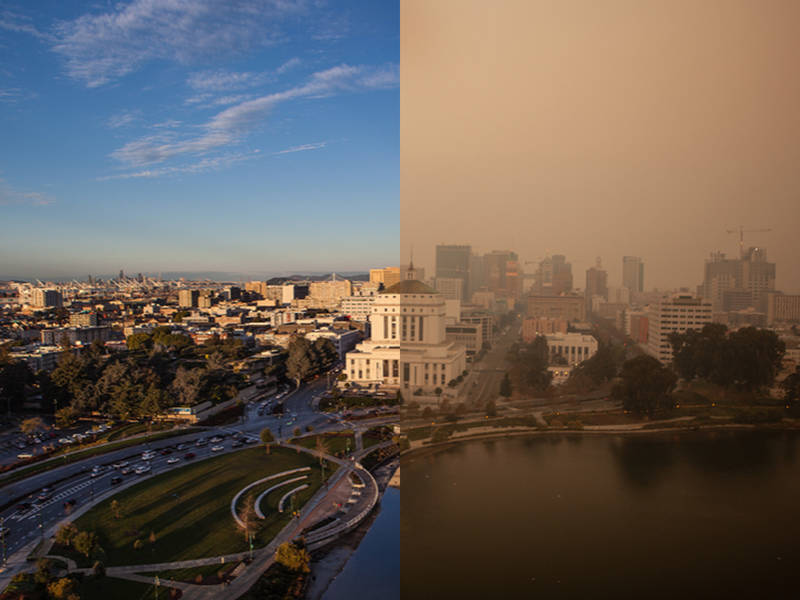 Before and after pictures of smoke in Oakland, CA

This interview from Inside Climate News with a Californian climate scientist sheds some light on how climate change is exacerbating California’s wildfires.  The main points:

Another relevant factor is the massive amount of dead trees in California — around 100 – 130 million — which are an excellent fuel source for wildfires.  The dead trees are a result of both the ongoing drought, which is made worse due to climate change, and bark beetles, which have spread from Central America and up the West Coast, all the way into Canada, and have found easy prey in the drought-weakened trees of California.  The warming climate also helps the beetles, by helping them survive the winters.

What will be the result of California’s new fifth season?  Like in the Broken Earth trilogy, it will certainly not help with resource scarcity, especially housing, and put more and more strain on government budgets.  And it will definitely reshape our behaviors and the way we will plan out our cities and our lives; there are serious questions that ought to be raised, such as whether there is a right to protective equipment, when a municipality ought to declare a state of emergency, how to be proactive about smoke damage to at-risk populations, and how to enforce safety standards onto the multitude of corporations that will be sure to drag their workers into the toxic air regardless of what prevailing medical advice is.

It is worth emphasizing that natural disasters are ultimately bounded by what kind of socio-economic system they encounter.  In addition to battling against fossil capital, what we need to do is develop “disaster communism” (see as described by Commune, Libcom, and Verso) as a counter to disaster capitalism, and take advantage of climate chaos in whatever ways we can, both for survival as well as revolutionary class struggle.

There was a very interesting article published recently in War on the Rocks about right-wing paramilitary groups in Ukraine, and their destabilizing effects on governance.  Of note is the series of tit-for-tat seizures and blockades of various supply lines that occurred in the first few months of 2017.

In late January, militia members engaged in a very well-coordinated blockade of coal shipments from eastern separatist regions, which soon sparked an energy crisis.  In response, separatist militias began seizing control of factories in the east that were owned by pro-Kiev oligarchs.  In mid-March the fed-up authorities cracked down on the blockades and arrested the unruly nationalist militants — only to provoke mass protests, occupations of government buildings in four different regions, and a new blockade against the president’s candy factories.

Two days after the protests and occupations began, the Kiev government abruptly reversed its position and declared an official ban on all goods from separatist regions until the separatists handed back control of the pro-Kiev oligarch’s factories.  That didn’t happen, and now it seems that Ukraine is making up its coal import deficit with supply from Pennsylvania, with additional talk about cutting down imports from Russia.

What’s interesting in all this is the intersection of militant protest tactics (albeit by armed right-wing nationalist groups), a strategy built around disrupting very specific parts of the economy, and fossil-fuel supply chains.  Perhaps environmentalists can take a cue out of this book for the battle against carbon oligarchs and climate change.  For example, there has been an ongoing fight in the San Francisco Bay Area over a potential coal export terminal at the Port of Oakland.  If the terminal does end up getting built, how feasible might it be for people to blockade the coal shipments coming in from Utah?

Cobalt in the Congo

The Washington Post has published a very pretty report on the “artisinal” cobalt mines of the Congo, and on the important role of these exploitative and dangerous mines in the global supply chain of high-tech consumer products.

Its a good reminder of what a mess the Congo is in general, and its position in global capitalism.  I wrote a blurb a while back when Amnesty International published a report on child labor in Congo’s cobalt mines, with the main point that unlike a lot of standard liberal narratives about impoverished parts of the global south as being “uncivilized” and in need of Western engagement, the thing to recognize about the Congo is that it is all too integrated with the “civilized” parts of the world.  Violence and exploitation in the cobalt mines is simply a predictable externality of the increasing hunger of a global economy increasingly driven by high-tech products, and decades and decades of imperialist subordination.